I put some cloth tape in the aileron cove as a gap seal, and increased the aileron travel slightly. She's now waiting on weather so I can get some more flight time on her.

Over the next day or so I'm going to get the plans tweaked on and then get them up to the graphics shop to see how much it costs to get them scanned and/or some copies made for anyone that wants a set.

For now here's a couple pictures I took the day I test flew it before the maiden, it was pretty cool to see the Krier and the Skybolt together again, even though it's not Papaw's Skybolt lol. 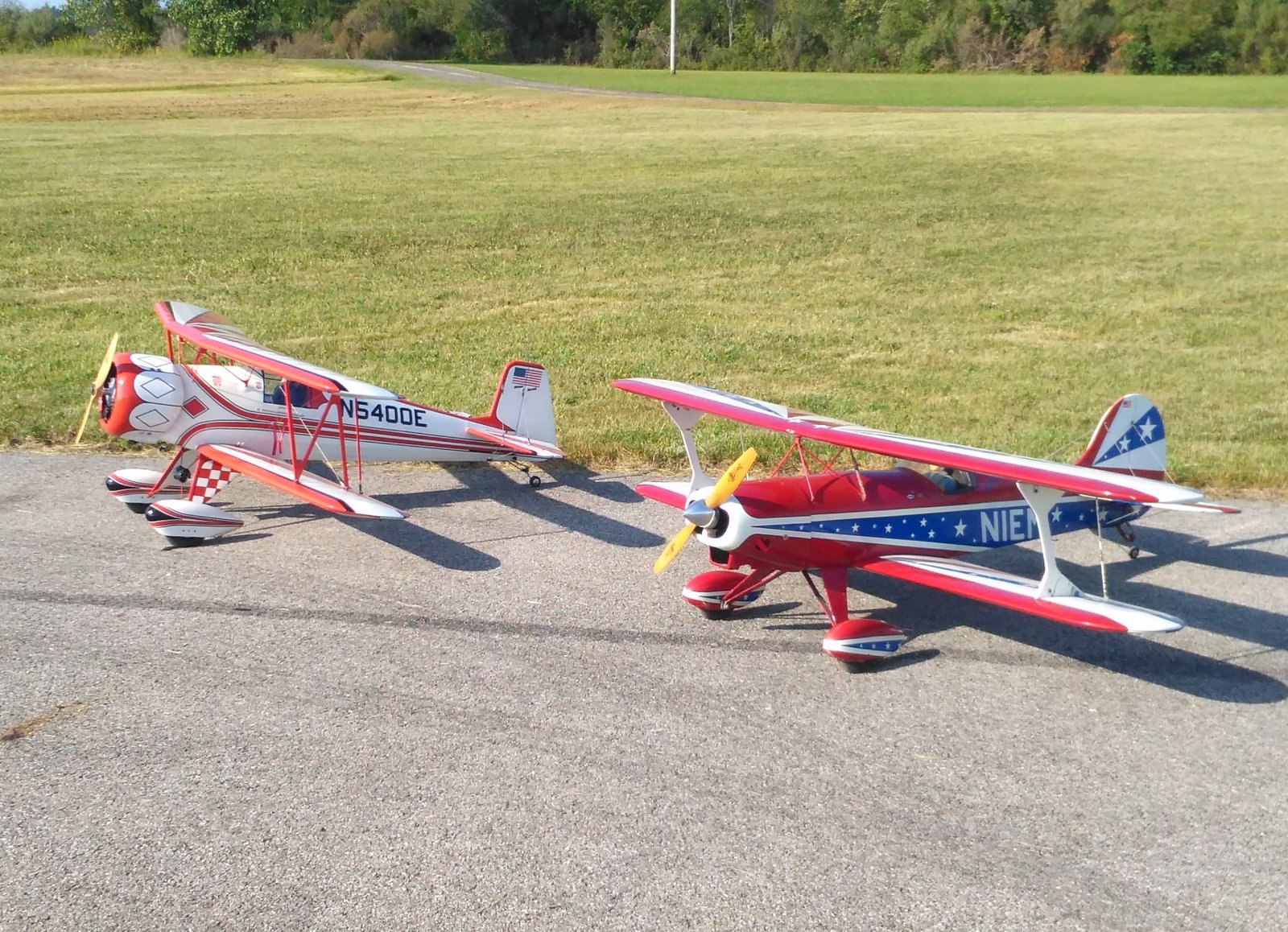 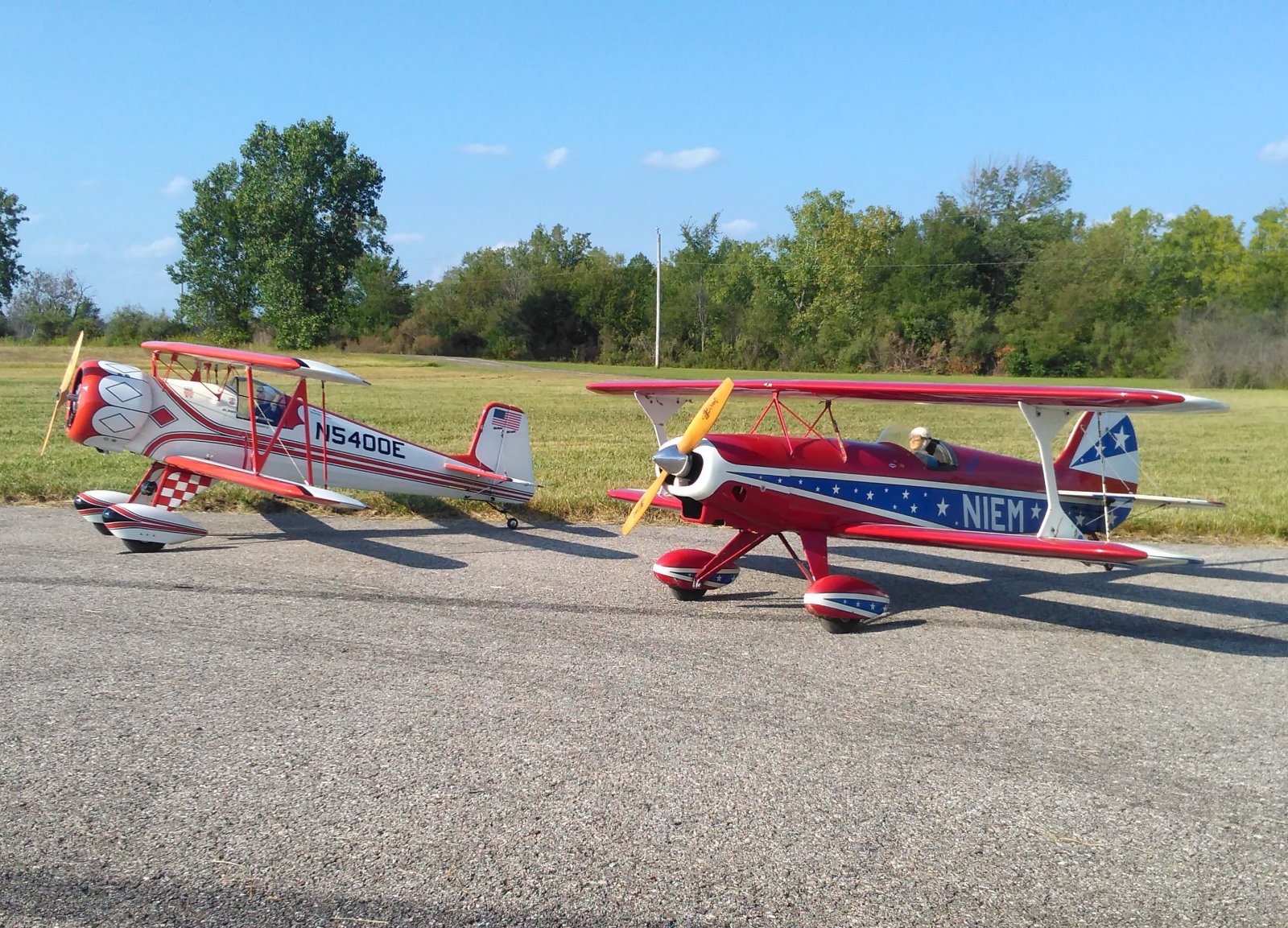 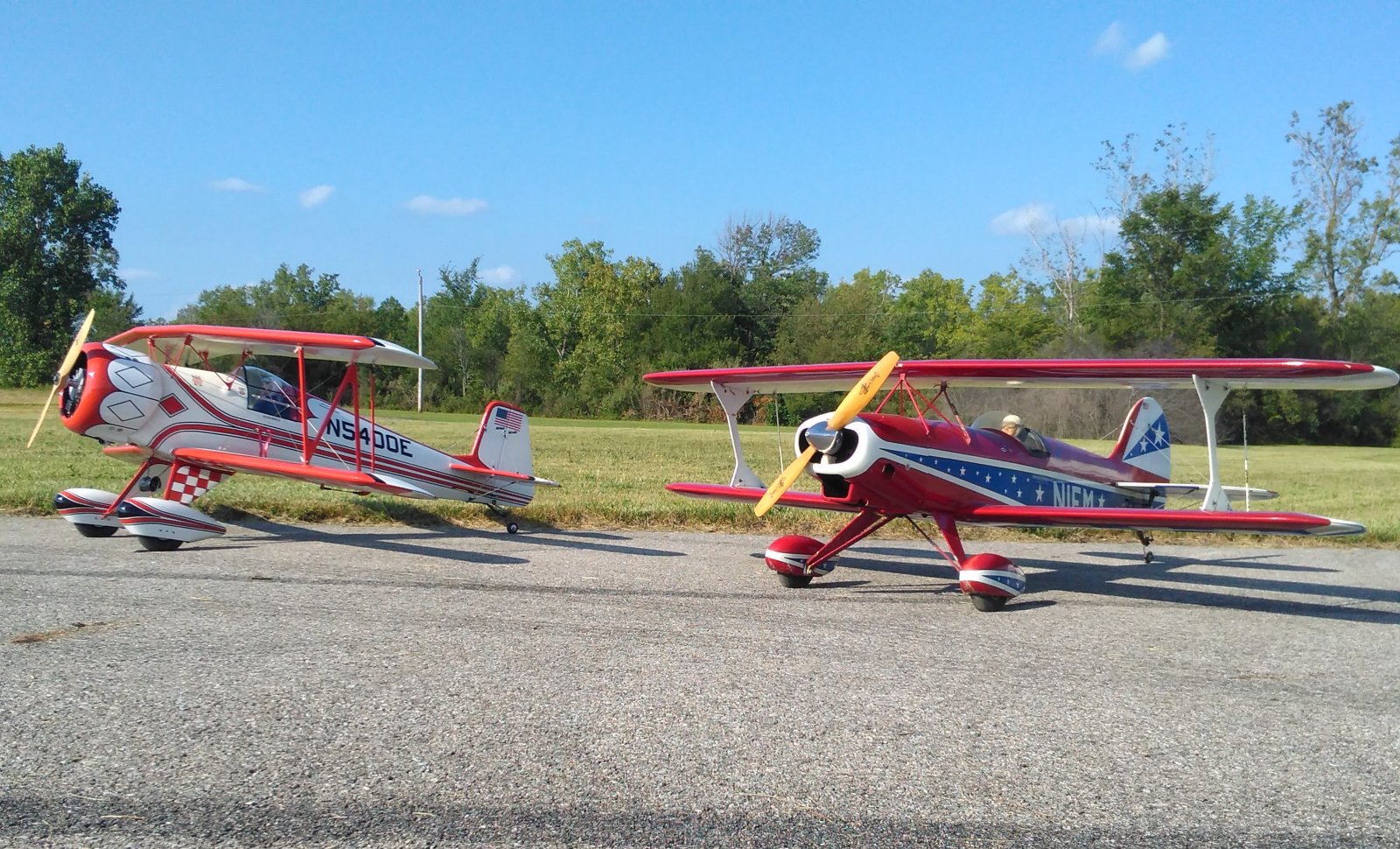 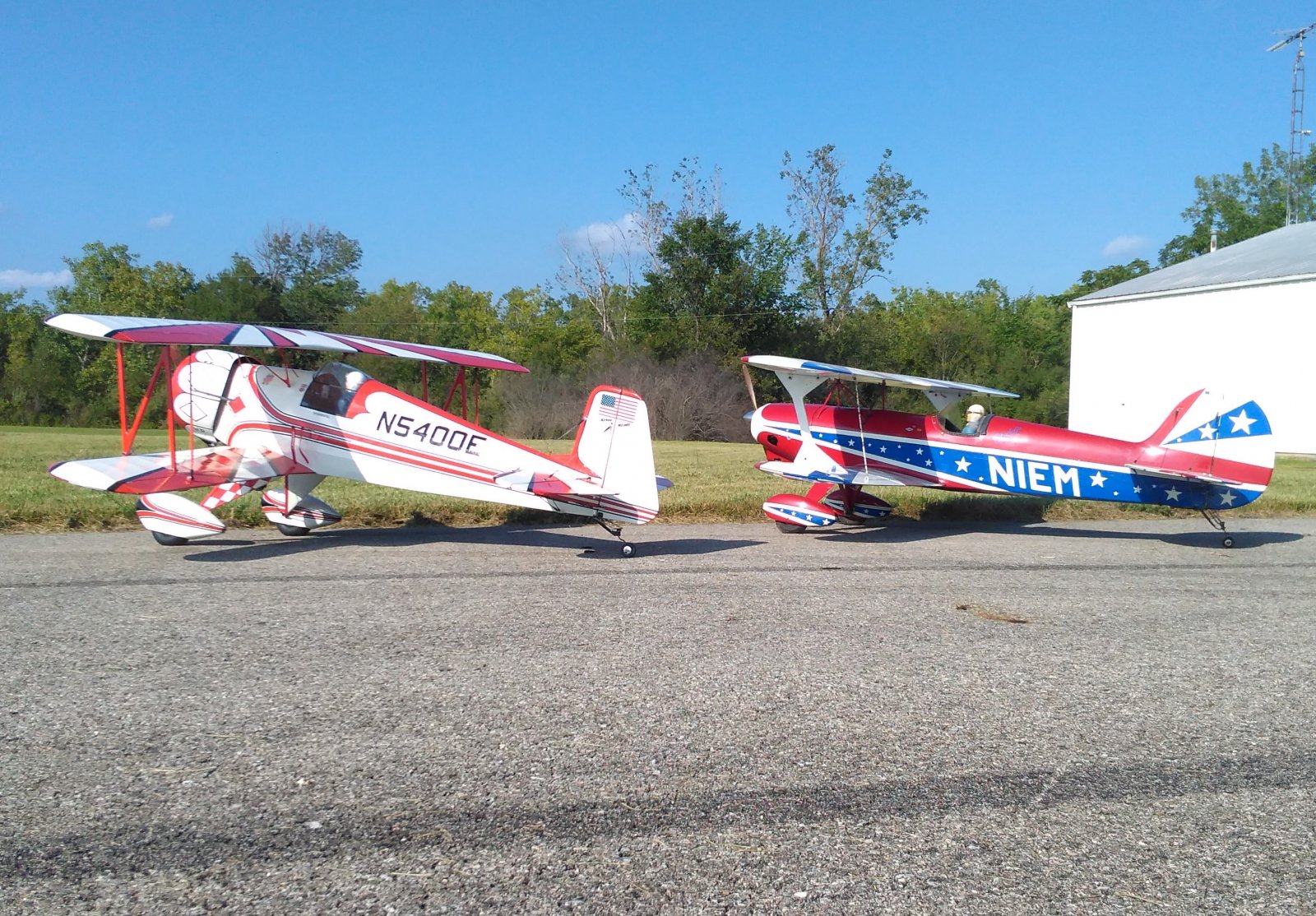 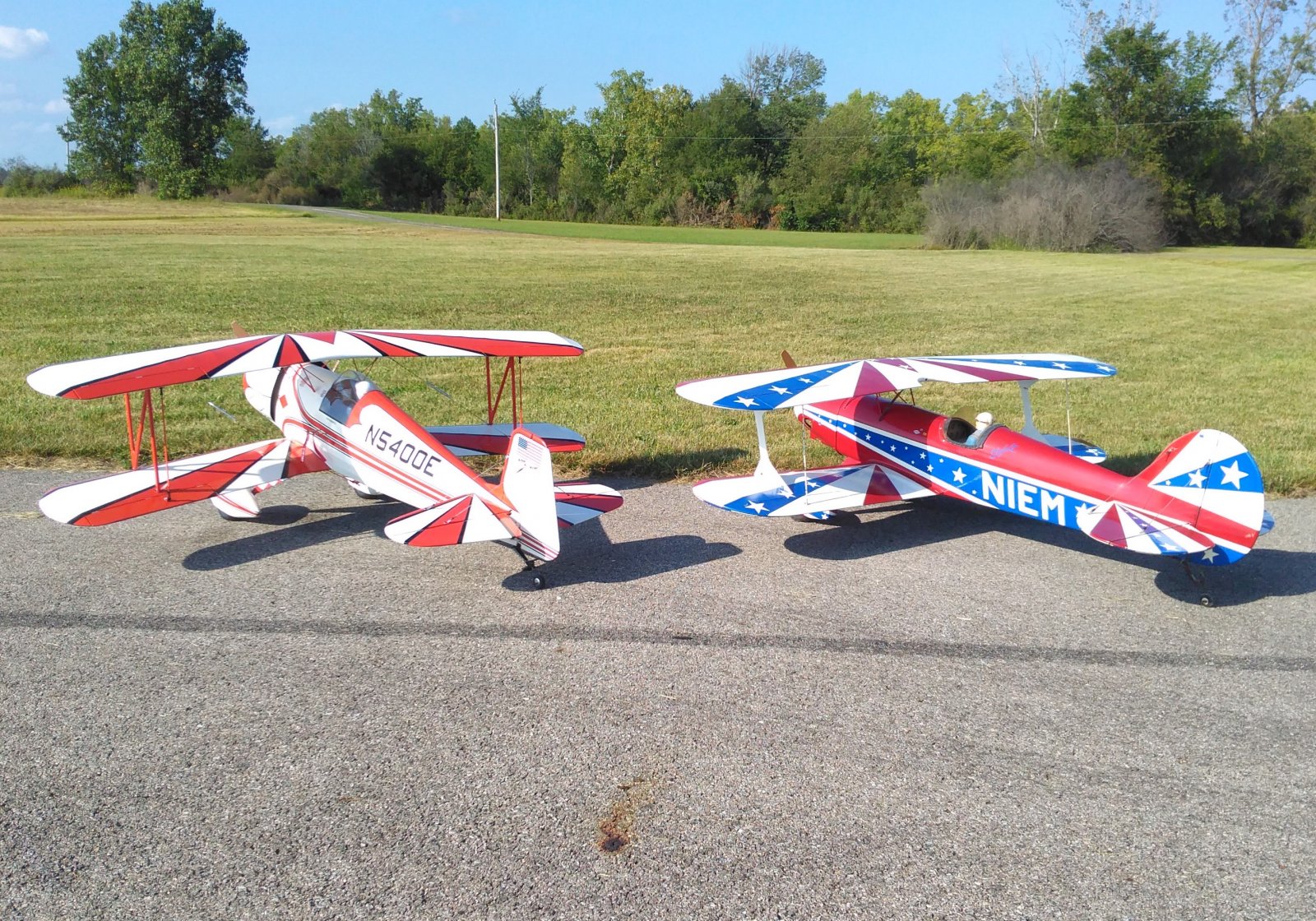 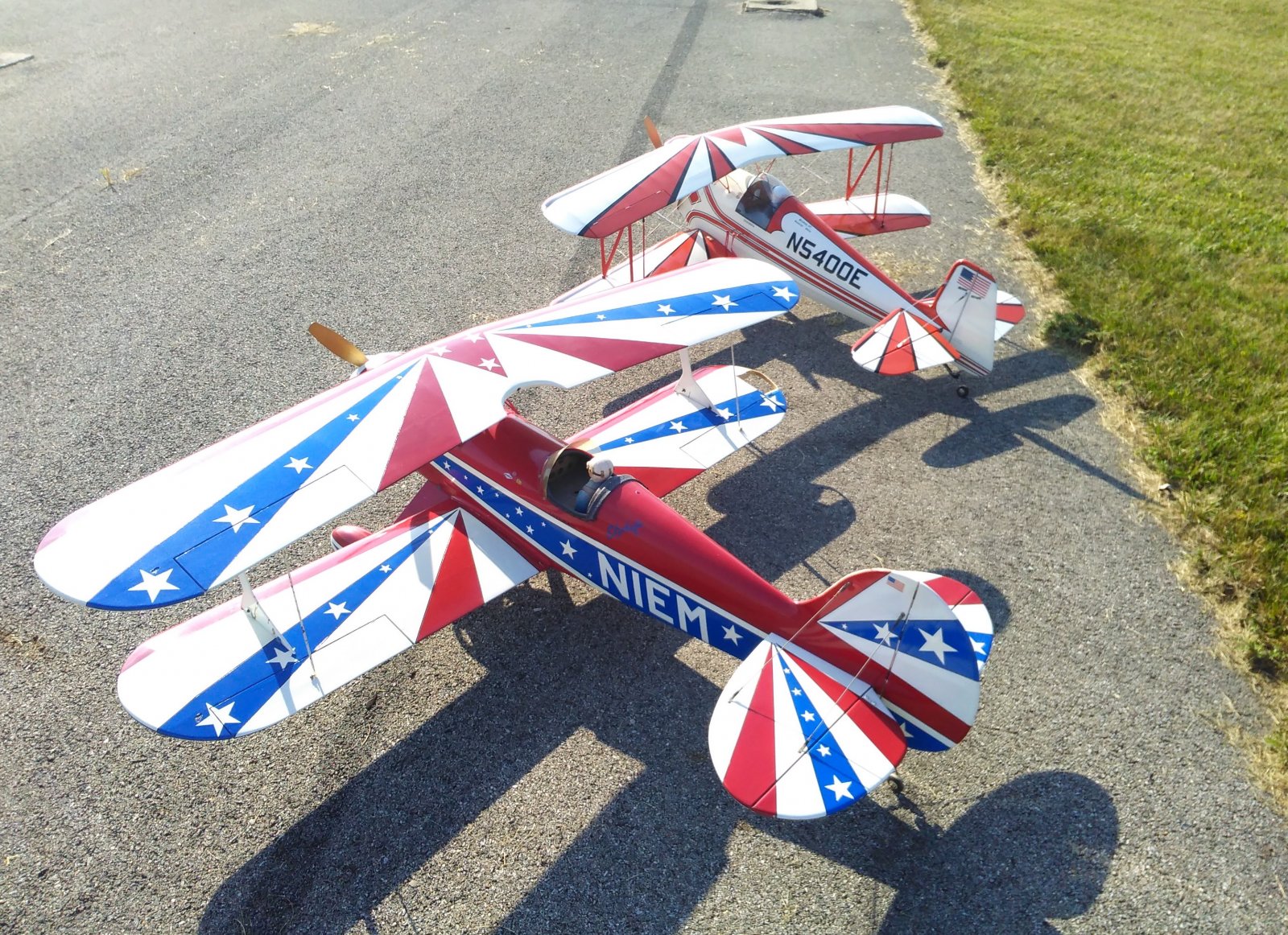 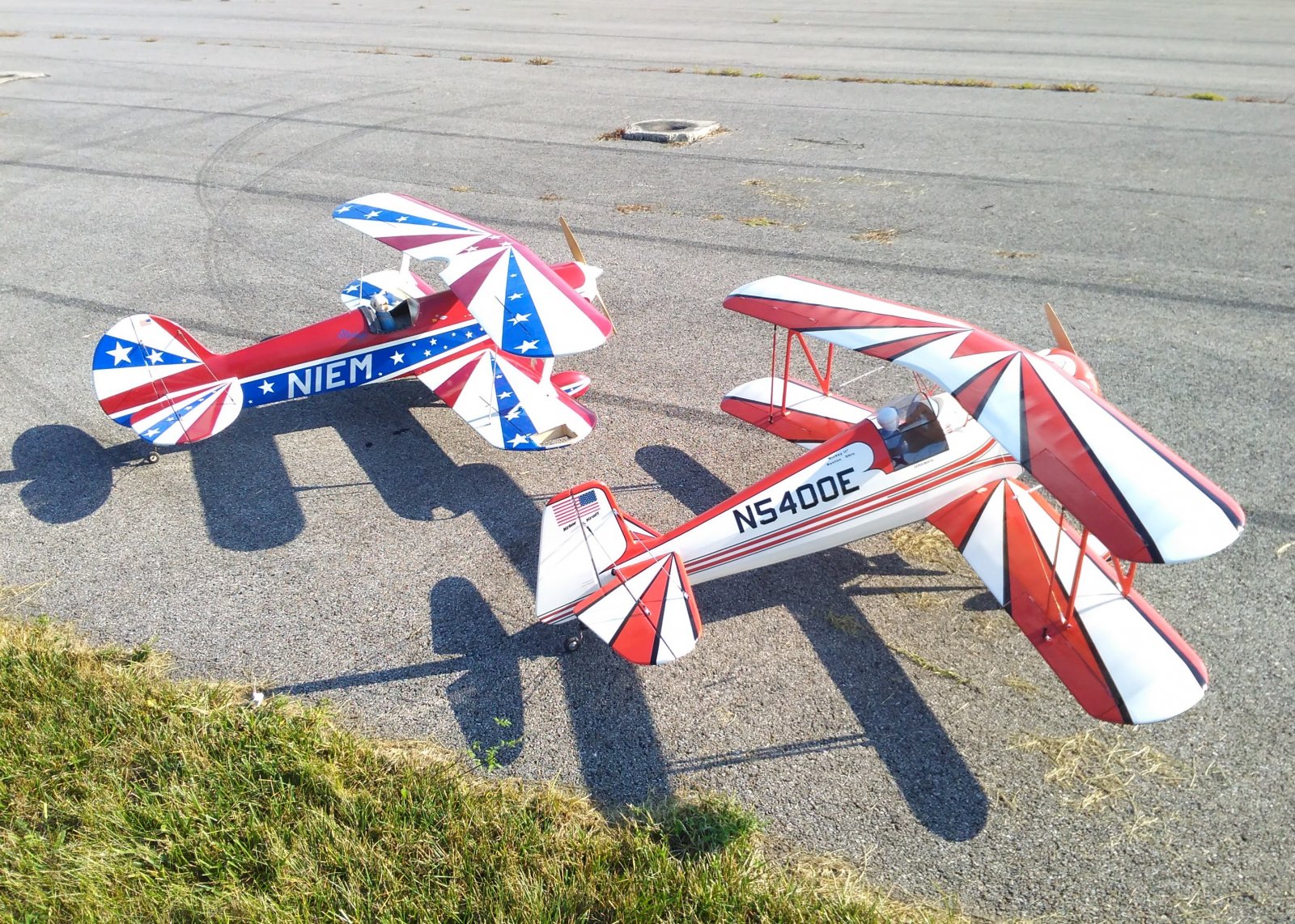 Very Very Nice!!! You should be proud and I'm sure your Granddad is smiling!!!

Nice shots. Thanks for bringing back some great memories. I remember when I could not wait to get to the field early with my 25% Bucker Jungmiester because I knew a Great Lakes and Steen Skybolt were there awaiting for some formation flying. A Fly Baby Bipe would join in time to time as well. They all flew Zenoa G-26's in them but I was a diehard YS guy. Wish I had pics of back then because they were almost identical to yours. Very NICE.

Now "THAT" is a tribute. Total sweetness. Those planes look great. Congrats on your success......

Any new flight test on the Krier Kraft,also updates on cost of plans. I have review all your flight vidos,the plane looks great in the air

donnie fendley said:
Any new flight test on the Krier Kraft,also updates on cost of plans. I have review all your flight vidos,the plane looks great in the air
Click to expand...

Not a lot, life and weather got in the way a bit. The plans are ready to go to the local print shop and get scanned. I'll get that done in a few days when I get a few extra bucks lol.

After a lot of thought and back and forth about charging for them I've decided to just scan them to a PDF and mail them to whoever wants a set. If someone needs a hard copy I'll get a set printed and mailed at cost. And for the guys that just feel they have to pay for them I'll give them my PayPal address and they can give whatever they think is fair.

These are far from professionally drawn plans, and I just can't bring myself to charge anything for them.

I still think that just seeing a few people building an airplane I designed would be enough payment for me
Last edited: Oct 7, 2017

Any new flights on the krier kraft, yes i would like to get a PDF , IF can mail the PDF FILE AT 4762 Walteta Way Las Vegas ,Nevada 89119.I would like to start construction ASAP.

donnie fendley said:
Any new flights on the krier kraft, yes i would like to get a PDF , IF can mail the PDF FILE AT 4762 Walteta Way Las Vegas ,Nevada 89119.I would like to start construction ASAP.
Click to expand...

Ant new flights on the krier kraft,are any changes on the planes due to flight test?What is the total weight of the plane at present.Bipegui03 I would to get started on construction,look forward to here from you.
S

Bipeguy03 said:
WHERE THE IDEA CAME FROM

Well, I've been itching to build for awhile because as much as I love my PAU ARFs nothing compares to the feeling of flying a plane you created from a box of stick. I had fun rebuilding my Pitts but again, it was a rebuild.

Now I have been considering the Hostetler 35% Pitts, but after a late night kitchen table talk with my dad I now have a different idea.

Dad has been wanting another bigger airplane, but he isn't the kind of guy to get an Extra or Edge he likes to be different. So sitting with him at the table that night looking at what was a available I remembered seeing the Seagull Models Bucker Jungmeister at the Sig booth at Toledo last year. As we looked over the pictures and specs dad made a comment that he liked the Bucker because it reminded him of Grampa's Krier Kraft and the lightbulb in my head went off.

1971 was the year, grampa Mick (short for our last name) just got out of the Air Force after his voluntary second tour in Vietnam. He moved from Massachusetts to Ohio for work after him and grandma separated and settled in. That winter dad came out to live with him and grampa who had been building models since he was a kid in the 30s decided to get started in the hobby again. During the following years, grampa Mick and dad built and flew to many airplanes to count.

As the 70s grew to a close, and dad now 18, had a fiancé and wasn't flying RC as much grampa started getting into giant scale airplanes after joining the IMAA. One of the first planes he built was a sport scale model of a little known full scale aerobatic Biplane designed by Hal Krier.

Grampa ordered a set of Flying Models Magazine "King Kong Krier" plans and went to town changing some aspects to make the model have the proper outline. He shortened the nose, removed the Bucker type hump in the turtle deck, made the belly skinnier, reduced the forward rake in the landing gear, changed the shape of the tail to look like the early rendition of the full scale, and reshaped the wingtips as well as stretch them 2 inches to get to the proper scale span of 71".

He fabricated everything on his Krier with the exception of the pilot, engine, wheels and radio equipment. He even made his own fiberglass fuel tank. The landing gear was made from piano wire and made to have functioning bungees in the scale locations.

The Krier's finished weight was 18 pounds, covered with Sig Koverall and painted with dope. It had a Quadra-Aero Q35 for power, and probably it's most unique feature was functioning boost tabs on all control surfaces allowing for use of STANDARD size servos. Keep in mind that standard servos of the late 70s and early 80s only had 30-40 oz of torque!

The canopy was made out of pieces of other larger canopies and flat clear plastic stock, and all of the pen striping was painted on by reverse masking.

The headphone jack next to the power switch was the ignition kill, putting the plug in the jack shorted the magneto to ground killing the engine. Gampa Mick did this to all of his gassers. Grampa built a few giant scale airplanes including a Hostetler Skybolt (which we still have) and a large Stinson Reliant.

He had and flew the Krier Kraft until the day he passed away in March of 1988 less than a month before my first birthday. My dad flew it a hand full of time afterward but not anywhere near as much as grampa. One day a guy approached him about buying it, and dad just starting a new business and with 2 young kids (me and my older sister) he decided to let it go.

Grampa's Krier I'm sure is long gone, but we still have the memories. I still close my eyes and see it sitting in the back of dad's full scale hangar ready to be flown.

There will be more stories to tell as the build progresses but for now lets start with the build!
Click to expand...

I personally knew Hal Krier and hung out a little in his hangar in Rose Hill, KS where he kept the Krier Kraft. It was indeed a beautiful airplane and Hal was a heck of a nice guy. Sadly, he was killed trying to spin certify a two place Spinks aerobatic trainer.

This old thread has inspired me to tackle a project I've been wanting to do for a while now. I've been flying a 20cc UCD for a few years now and love it, but it's been discontinued and the one I'm flying is a bit beat up. With the 20cc engine up front, the nose needs to be shortened a little, and the rudder and elevator can be reduced some, as they are a bit overkill. They also need to be made out of 3/8 stock instead of 1/4, for better hinge retention. So, I'm going to give drafting out my own plans a go, once I dismantle the one I'm flying to make all the templates I need to make. Should be a fun project! Thanks for the inspiration!!